Story of a war photo

This photo has been shared with following captions: 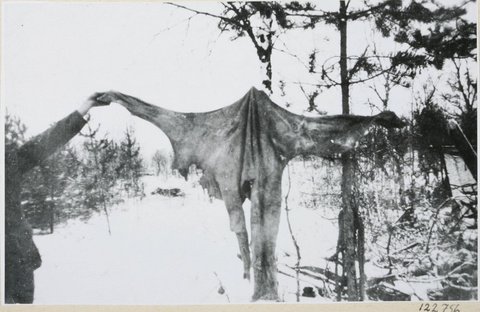 Source: WikiMedia. The meme version can be found from Reddit.

According to various background stories, a Soviet patrol that was cut out of food supplies had butchered a few members of their own patrol group, and had eaten most of them. Finnish platoon had surprised the Soviet patrol “in the middle of cooking”.

Aamulehti published a related story in 2016. They interviewed Olli Kleemola who has published books about Finnish war photographs. In this interview Mr. Kleemola casts a shadow of doubt: the skin is probably from a moose.

I bought Kleemola’s book Tuntemattomien Sotilaiden Albumi (Album of Unknown Soldiers) and found a chapter about this photograph. Translation of pages 120-121 below:

The pictures in these pages depict the skin, head and internal organs of a Russian patrolman, shot by his own. Reporter Reino Ikävalo has interviewed a Finnish veteran about this series of images and the related events. A Finnish patrol had surprised the Soviets in the middle of cooking. The veteran interviewed by Ikävalko had interrogated one of the members of the patrol, Ensign Anttila – a Finnish communist, who had in 1932 defected from Finland into the Soviet Union. Anttila told that the objective of his patrol was to monitor the traffic on the roads of Paatane-Porajärvi and Karhumäki-Porajärvi. The Finns had quickly detected the remote patrol, and in the ensuing combat two of the originally six-person group fell. The group also lost their radio and had to hide in the Finn’s rear for two months. At this stage, the patrol consisted of two privates of Ukrainian origin as well as Ensign Anttila and a radio operator, Finnish-born private Savander, who moved with his family from Canada to the Soviet Union before the war.

After one of the Ukrainians had broken his leg, Anttila shot him and the remaining patrol ate him. After their food supplies once again ran out, the remaining patrol decided to attempt to reach their side on the other side of Lake Seesjärvi. However, Lake Seesjärvi was not frozen and the journey of the group ended on the beach, where Anttila then shot the other Ukrainian.

The Finns alarmed by the shot, surprised Savander and Anttila while they were cooking a flayed and mutilated body. In the interrogation Anttila praised the flavor of the meat as especially good. The picture of the body parts was taken by a corporal from Turku, a member of battalion II/Infantry Regiment 60, who had been commanded alongside with two privates to bury the remains of the body. Before the burial the flayed skin of the eaten soldier was spread open and the other remains were put on a field stretcher for photography.

The images had been taken without permission, as the photography permit granted to Finnish soldiers, alongside executions and dead bodies also prohibited the depiction of “unconventional subjects”. The corporal from Turku, after arriving on holiday, manufactured dozens of copies of the photographs, which he then traded with his comrades at least in Turku, Helsinki, Äänislinna and Karhumäki in exchange of liquor, tobacco and money.

The pictures taken by the corporal spread among Finnish war photography albums as well as outside the Finnish border. In the November of 1942 a so called “Special commission” was found in the Soviet Union, the mission of which was to collect material for the upcoming war crimes trial. Such material was, among other things, photographs collected from fallen and imprisoned opponents. Among the photographs were several pictures that were a part of the cannibalism series of images. Two of these pictures, which apparently ended up in Moscow via Stockholm and Geneva, were published in the soviet propaganda magazine called the “Sotilaan Ääni”. In the magazine’s text it was stated that this is the way how Finns treat Russian prisoners of war.

The story of Ensign Anttila doesn’t make much sense. The Finnish patrol were after them and they still decided to shoot, skin and cook one of their own.

I contacted Mr. Kleemola and bought his book Valokuva Sodassa (Photo in war). Some cases of wartime cannibalism have been recorded and photographed. However, this wide-spread photo in question most likely shows a skin of a moose. It is most likely an example of wartime propaganda.